5 minutes with… the legendary June Kenton of Rigby & Peller 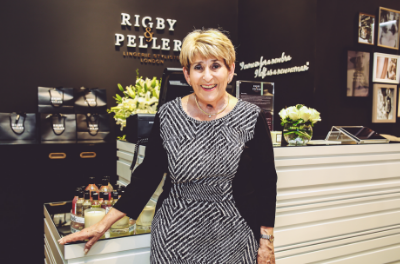 Now in her seventies, June Kenton, HM Queen Elizabeth II’s corsetiere, talked to The Mothership about motherhood, changing body shapes, and why you shouldn’t buy your dinner and a bra at the same time

You might not be able to solve the baby crying at night, but you can wear the right bra.

If you are uncomfortable it’s much harder to look after a little one, because you’re bending down, picking the child up, you’re doing all sorts of things that perhaps you wouldn’t have done before having a baby. If you’re not wearing the right size and you’re falling out of your bra, it’s not good because you’ll become very floppy and loose, but if you’re in the right one you feel more in control and in a better place to look after everyone.

You do change shape – we’re all changing shape all of our lives.

After having a baby, after breastfeeding, when you go on the pill, when you put on weight, lose weight, take HRT, hormonal changes every month… We have customers who have bigger bras just for that time of the month. You can’t start your life as a 34B and end up with the same size bra that’s like two nipple warmers!

What happens is that usually the mother is wearing a bra that is ridiculous; she’s never had a fitting and she has no idea what size to wear.

When you’re 12 or 13, and you start to form, your mother says ‘Well, we better go get some bras for you’, and she does the fitting. She doesn’t have the faintest idea what she should be wearing, and here she is doing a fitting. So what normally happens is that a fight breaks out in the fitting room, because the mother doesn’t want to buy what the teenager wants, so when they come into Rigby, we always say “Mum, would you mind just sitting outside for a minute?” then you can talk to the girl and find something she likes, and fits her, that she wants to wear!

I don’t like any of our customers walking out with something that they wouldn’t be seen dead in, because they won’t wear it!

You have to listen to the customer. Don’t sell her what she wouldn’t wear. They have to be happy. We’ve always had MPs, and celebrities, and all sorts in. They realise that we do a proper fitting. We don’t measure anyone. In London we only look and in two minutes we can get the right size. Everyone wants to look good.

This business of going into Marks and buying a dinner for one and a bra needs to change.

You see it and it’s so pretty, and you think you know your size, so it goes into the shopping basket. I always ask groups ‘How many of you have two drawers full of bras that don’t fit them?’ and everyone does. People say they wouldn’t spend a lot on a bra, but then they’ll buy eight cheap bras that don’t fit, instead a few really super ones that do.

Bigger women would look half the size in a bra that fitted them.

Clothes would look different, everything would look tremendous – people buy wonderful clothes and rubbish bras that don’t fit them. You probably don’t need a new dress if you wore the right bra, because it would be transformed!

You should forget about your bra during the day.

You should put it on in the morning, and take it off at night, without thinking about it in between, or organising yourself, or pulling the straps up. It’s so important to be comfortable. If you buy good bras, you don’t need loads. Maybe four or five, including a sports bra. I go the the gym a lot and I can’t bear it when I see everything is moving!

And now the backs start at 30. The average is now a DD or E; we’re eating better, we’re living better, and we’re getting a bit fatter. You’d be amazed how many women wear too big around the back, but the cup size is too small and they don’t like going up cup sizes – most would rather wear a 36C than a 34E or F. I would say 70% of women don’t like their breasts.

I love being a mum.

I was in business with my husband, I was in the store, but I would leave at 2pm and always picked them up from school. We adopted. I wanted children so badly, but it didn’t happen, so our children are adopted, and I said to myself that someone has given me their child, and I must do my utmost to be a super-duper mum, and I hope I was.