A note on dogs and babies 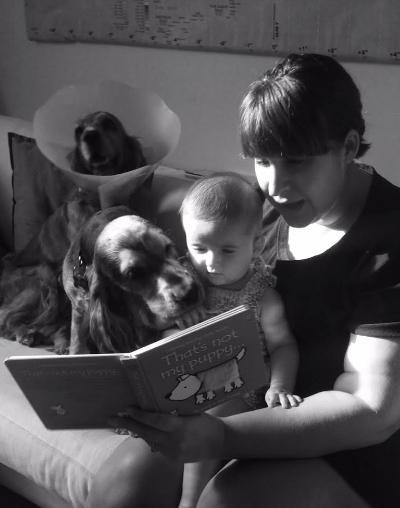 We adopted Lizzy, our beautiful old lady cocker spaniel, around two and a half years ago, adding Jarvis to the brood a few months later.

In truth, they were great practice for having a child, with poo, bills and responsibility, and I saw a new side to my husband, as he lay on the floor stroking Lizzy’s head after an operation. It was all encouraging stuff for our relationship.

When I was pregnant they definitely knew something was going on, with Jarvis cuddling up close on the sofa, draping himself over me, all big brown eyes and tenderness.

So how was adding a baby to the mix? We read a lot about introducing her to them, and they smelt her sleepsuit before we came home from the hospital (didn’t go as far as letting them sniff a nappy, however), and vowed that we would treat them exactly the same. After all, it wasn’t their fault that everything was changing.

Initially, they weren’t sure, watching this little creature who inevitably consumed us, raising their eyebrows and sighing loudly as she cried. Jarvis in particular became curious about her – Lizzy is probably too old to waste her energy on anything that isn’t eating or barking at the long-suffering gardener – and now licks her feet whenever he can. I honestly don’t know why we’re still sterilising bottles – I saw them rubbing noses the other day.

Recently Phoebe has started to find them utterly hilarious, giggling whenever they pay her attention and laughing her head off when we say ‘woof woof’. And they’re besotted too. She’s basically being part-raised by spaniels. And I’m pleased about it.

There was an, umm, incident a few weeks ago when Jarvis went for Lizzy after she got too close to the sprog (who was unfortunately in the way and ended up with a bit of a Harry Potter-style scratch) but after a few tears (yes, mine) everything was fine. Then we went to Dragon Mart and bought some truly disgusting playpen fencing that has taken over a third of our living space, but means Phoebe can roll around to her heart’s content without worry of being licked endlessly.

What the future holds, I don’t know. Soon enough she’ll be walking, pulling their tails and putting pudgy fingers up wet noses, which might not go down well. But hopefully she’ll be fearless, and if her first word isn’t ‘mama’ I hope it’s ‘woof’.