Fear of flying (with a baby)


I used to enjoy travelling. Seven hours direct to Newcastle (thankyouverymuch for that route Emirates) would involve a few films, a few drinks and zero chat – apart from one hideous journey when a man started chatting to me at the gate, only to sit next to me on the plane, and talked endlessly about his car collection. He was wearing a cap with a solar-powered fan on it. That guy. When he wasn’t looking I tried to put my headphones on, and he leaned over and pressed pause on the mini-screen so I couldn’t ignore him. Yes, really. 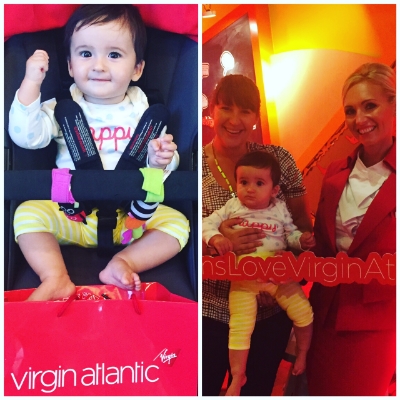 Anyway, apart from that horror show, I’ve generally enjoyed being able to ignore the outside world (in-air wifi? No thanks) and catch up on some quality Aniston-based entertainment.

Until we had a baby. We flew back for Phoebe’s christening when she was six months old and she just fitted in the bassinette with millimetres to spare. Not only had I packed litres of formula in case there was a delay, but also spare clothes for both of us in case of a milky vomit at 35,000 feet, blankets, nappies, toys, even her unwieldy elephant thingy that makes a heartbeat sound – basically, all the gear and no idea.

There was no film marathon. There were no tiny bottles of red. Instead, I ate a hot meal one-handed, watched half an episode of Miranda and tutted loudly every time the seatbelt sign came on and we had to get her out of the bassinette.

In short, not fun.

Earlier this week Phoebe and I went to an event with the team from Virgin Atlantic who talked about their family-friendly in-flight services (hello cabin crew who will warm up milk and offer puree food, being allowed to bring car seats on board, and free backpack full of activities for kids) and it got me thinking about what assistance I’d like to see on planes in the future.

I could only come up with one: a babysitter.

Failing that, throwing money at the problem and upgrading one parent to business class so they can enjoy some peace and quiet, then do shifts of childcare. Be warned: I did hear of a couple who did this, only for the husband to enjoy the finer things in life first, get completely walloped on ‘free’ champagne and fall asleep for the entire journey leaving his wife alone with the baby – all the way to New Zealand.

We’re going back to the UK in December and I fear it will be merry hell instead of merry Christmas. Maybe I’ll upgrade myself and have a seven-hour snooze…

4 responses to “Fear of flying (with a baby)”