Why fed is best – for everyone 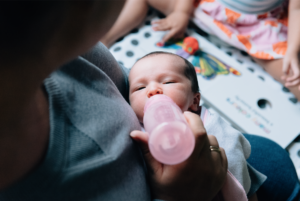 I’d forgotten how hard (SO HARD – and painful) those first few weeks are after having a baby, but the big difference I’ve noticed between being a first time and second time mum is confidence. I don’t just mean deftly changing a nappy or not being scared when it’s bath time, but confidence to make decisions that I believe are best for my baby – and me – without giving a shit what other people think.

When I had my eldest daughter, the first month was a blur of gazing lovingly at her, and walking about the house wearing maternity leggings with my boobs out, crying at the pain and sheer difficulty of breastfeeding. Of watching other mums seemingly effortlessly put their baby on their breast without having to stop the conversation, without checking the latch again and again, without stamping their foot in agony for the first few seconds. Without worrying that their baby was getting enough milk.

For some background info, I had a breast reduction in 2011 (not that you can tell right now – it seems you can’t keep a good pair down…), so was always worried about supply if I had children and chose to breastfeed. But I gave it a go. And sure enough I didn’t make much milk. Hours of pumping for mere millilitres. I remember going for a weigh-in with Phoebe and being told that she hadn’t gained enough weight, and crying in the car over a curve on a chart, not wanting to ‘give up’ – encouraged by a well-meaning but misguided midwife to “just to keep going for a few more weeks”. A few more weeks felt like a lifetime of worry. It felt insurmountable.

What I needed in at moment, in that hormone-fogged time of tears and exhaustion, was confidence, to give myself ‘permission’ to combination feed, for an expert to recognise that this wasn’t working out for me or my baby, and to gently suggest alternatives that would take away some of the stress I was going through. In the end it was my mum who asked the crucial question of “What do YOU want to do?” and it was to supplement with formula, so off to the shops we went, and it was the best decision for me. For us as family.

We hear ‘happy mum, happy baby’ so much, but rarely seem to live by it. To put our own needs first – basic needs of sleep and mental wellness.

For me, the peace of mind of giving my baby a bottle (of either expressed breastmilk or formula) is key: I know how much she has had to drink, which means when the inevitable squawking starts, I can – usually – rule out hunger. Practically speaking, I’ve found it easier to get into a routine with bottle feeding, and I don’t have the time I did with the first baby, so spending hours with her on the boob, while my two-year-old gleefully jumps on the sofa out of arm’s reach, just isn’t possible.

If I’m being truly honest with myself (and you), I’m finding it a lot harder to bond with my second baby, and breastfeeding is helping. That I can have a few moments a day – and it really is a few minutes – doing something for her that no-one else can do for her. Not my husband, or our nanny, or the grandmothers. Just me.

But here’s what I don’t like about breastfeeding. The pressure. The unrelenting pressure from pushy strangers (I had a message someone on Instagram after I excitedly demonstrated the formula prep machine that might be my favourite invention ever, saying ‘I think you should wait six months. Your milk is best’ – but I would not be shamed, and she was swiftly blocked), from other mums, from experts who have never been in tears, desperate and scared.

I also don’t like the clothes and am bored of the same limited nursing outfits, but that’s kind of beside the point.

We’ve all seen friends and sisters driven mad and miserable by trying to breastfeed when it just wasn’t working. That their nipples have been so sore and damaged that the baby spits up blood. We’ve all been told that breastfeeding ‘shouldn’t hurt if you’re doing it properly’ but it’s little consolation as we sit weeping, feeling alone, like a failure.

For now, my baby is having one breastfeed a day, usually in the morning before my toddler wakes up, and the rest is formula, and it’s working for us. By that I mean, she’s well-fed and happy and chubby (you can’t see her neck, which is always a good sign), and me? Well, I know she’s getting what she needs, and that’s everything.

Thankfully, in the two years since I had my first daughter I feel there has been a shift. Less judgement. When I was at a mum’s morning back then, there would be a few snooty looks when I mixed formula instead of lobbing my boob out, whereas now I’m part of a great Facebook group where I haven’t witnessed any nastiness at all aimed at mothers asking questions about bottles, or temperatures, or brands.

And frankly, if I did, this time I would have the confidence to tell them where to shove it.

2 responses to “Why fed is best – for everyone”