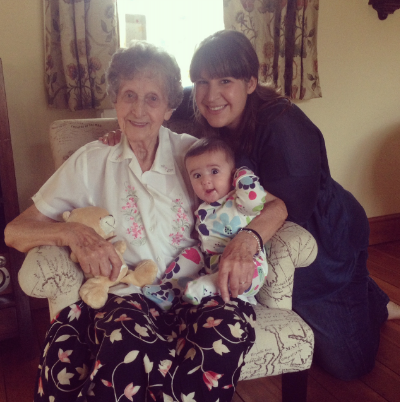 I’ve been very fortunate to have known three loving grandparents in my life, with Grandma Jean (age 94) still going fairly strong. Well, her legs bother her, the doctors can’t get her heart medication right and she’s finally stopped fighting against the inevitable stair-lift to help her continue to live in her own house, but her spirit is strong. She has been saying for about 20 years that this Christmas could be her last, but we all suspect that she’ll outlive every one of us.

In the cruel way life can be sometimes, my mum’s mum died three days before Phoebe was born, my husband delivering the news, unable to hug me properly due to my enormous bump and us attempting an odd sideways cuddle.

Grandma was widowed in her 40s and, to my knowledge, never entered into another romantic relationship. As I hurtle towards that age myself I’m struck by the searing truth that 50 years is a long time to be alone. She does, of course, have a sense of humour about it, joking during a recent examination when she needed a catheter fitted that the nurse ‘should watch out for bats down there’.

She gave my idyllic childhood even more adventures; picking blackberries in the woods and making jam together, staying up later than my younger brother so we could play Rummy with cards sticky from decades-old G&Ts, allowing us to eat dinner from trays on our laps as we watched the best/worst of 1990s British television on a Saturday night, hours spent looking through her jewellery box asking about each piece one by one, again and again.

Since having Phoebe I’ve been acutely aware that we should be in the UK so she can spend as much time as possible with her great grandma.

They met in July when we went home for Phoebe’s christening, and Grandma’s delight was clear; she had secretly bought her little presents (despite our insistence to keep her pension money for herself). We talk on the phone using the speaker in the hope that she’ll hear the occasional giggle or baby chatter, and when she does the conversation stops and I silently will Phoebe to say more.

Christmas is coming, and the whole family will be together. The highlight for me will be seeing Grandma and Phoebe together, two sets of brown eyes twinkling, and I know this reunion is keeping my favourite nonagenarian going too.

One response to “Four generations of love”