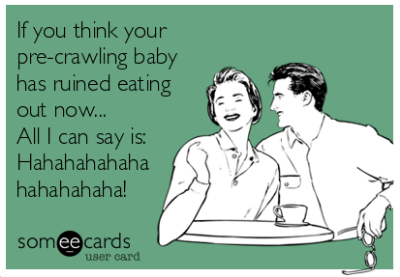 As a rule, I think it’s fair to say that men are more competitive than women. Let’s say it’s the testosterone – or maybe the ego? Either way, my husband is on something of a mission when it comes to our daughter’s development, whereas I don’t really give a hoot at this young age.

At eight months old, Phoebe is on the cusp of becoming mobile. This fills me with dread, while her father comes home every night, clears her play area and sets up the bait. All her favourite toys eg Bunny, Bigger Bunny, Even Bigger Bunny, Cathy Cat and Quack Quack plus his watch (which she is obsessed with, the little magpie) and his phone go in one corner, and the sprog is placed diagonally opposite.

She then drags her tiny body across the foam matting, commando-style, to the goods, where he promptly removes the watch and phone from her pudgy paws, offering up a rubber duck instead.

I genuinely don’t know what the hurry is. Sure, some of her little pals are properly crawling now, and trying to stand, but can’t we enjoy the security of putting her somewhere, and knowing she’ll pretty much stay put? Good grief, we have decades of worrying where she is ahead of us.

I’m not sure if it’s keeping up with the Jones’ that’s spurring on this competitive streak (we aren’t reading any books, so don’t have a clue what the so-called experts claim to be happening at this stage) or the desire to be ‘the best’. By his own admission, his parenting plans included having three boys – a golfer, a tennis player and a F1 driver; all individual sports that this fictional trio can do as they age (sometimes he mutters “veteran tournaments”).

She’ll start crawling in her own time. She’ll talk when she wants to. She’ll win Wimbledon when she’s ready. Let’s just revel in not running around after her whenever we go out for lunch while we can, ok?