How Oprah saved my sanity 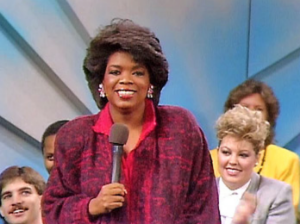 Before our daughter was born I hadn’t been around babies much. This was a major worry for me. Many of my friends have big families with yards of cousins, nieces and nephews, but we’re a smaller clan. And while friends at home have started breeding, they’re thousands of miles away. I was, in short, clueless.

We did antenatal classes for two reasons.

1. We knew nothing. NOTHING. I tried numerous times to read ‘What To Expect…’ but found it hard to relate to, and very boring. My motto became ‘Ignorance is bliss’ but decided that a small amount of knowledge might be a little useful. Something about a placenta…?

2. I wanted my husband to understand the magnitude of what my body was going through. He could be somewhat, umm, blasé about it all and him hearing just how bloody awful (literally) it might be/would definitely be, scored me a little extra sympathy.

The classes covered lots of pregnancy information and a fair bit about the birth (we opted not the watch the 1970’s style water delivery video when both of us went a peculiar shade of green as it started) and the break time snacks were AWESOME, but there wasn’t much on what to expect once the tiny human had arrived.

In the beginning there was crying from the tiny human. Lots of crying. And this would have been a very, very dark time if it wasn’t for Oprah Winfrey. Stay with me, folks. Towards the end of my pregnancy, a friend told me about a clip she’d seen on YouTube of an old Oprah show where a guest expert claimed to know how to decode the cries of babies. Priscilla Dunstan has a photographic memory for sounds, and quickly realised after the birth of her child that there are five distinct cries that all babies, regardless of language or nationality, use to communicate their basic needs.

Seriously. Watch the video. It’s 17 minutes, but well worth it. I’ll leave you to it.

Couldn’t be bothered to watch the video? Here are the five cries, taken from What To Expect’s less boring blog:

Neh – This means “I’m hungry”. Apparently as a baby’s sucking reflex kicks in and the tongue is pushed to the roof of the mouth the sound that comes out is a “neh” sound.

Owh – The “owh” sound is made in the reflex of a yawn which means “I’m sleepy”.

Heh – the “heh” sounds (similar to “neh” so be careful that you hear the beginning ‘h’ sound) means discomfort. This particular cry is to let you know that the baby is uncomfortable – cold, itchy, needs changing etc.

Eair – The “eair” sound means lower gas. It’s a deeper sound that comes from the abdomen. It is a bit more difficult to distinguish than the rest but is usually accompanied by a newborn pulling his/her knees up or pushing down and out with his/her legs.

Eh – The “eh” sound means that a baby needs to burp. It is similar, again, to “neh” and “heh” but remember that you are listening for those beginning sounds, not the ending sounds. When you hear, “Eh, ehhhhh” your newborn is telling you “Burp me, please”.

Maybe we were lucky, but for the vast majority of the time, the newborn Phoebe was easy to read with the five cries, allowing me to anticipate what she needed (food, burping, sleep etc) before a full meltdown ensued. The key is cracking the code early on e.g. in the first month.

I’m increasingly familiar with the last one. 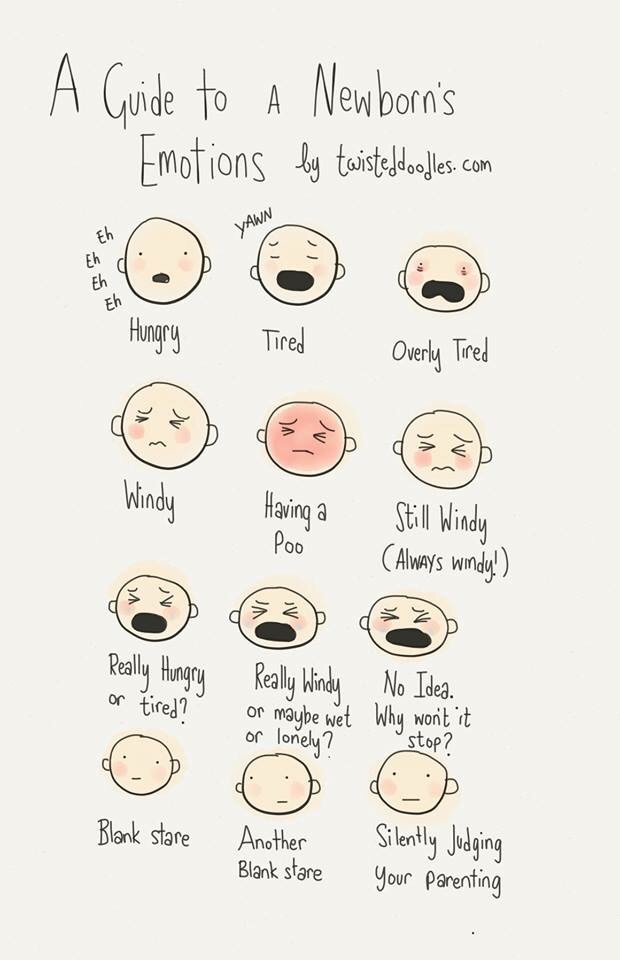 Ahhh, the silent judging and the raise of a mini eyebrow.