I was conflicted about having a party for Phoebe’s third birthday – the hassle of invites, food, party bags, entertainment, chit-chat with other parents, the (very real) threat of a tantrum as a result of too much cake and attention. In honesty, I very nearly didn’t bother.

But she’s friends with a lovely bunch of kids who had all invited her to fab parties, from lovely at-home affairs to treating everyone to big bashes, and she started asking about her own birthday. Could she have a cake? Would all her friends come? Could Barney the Dinosaur be there?

Barney has long been used as a source of bribery in our house, with promises of taking Phoebe to see him at Mattel Play Town when she sleeps through the night, to telling her that he’s friends with Lucy our dog, so she has to be kind to her (thankfully in one of is songs the name ‘Lucy’ is mentioned, so it seems a bit more legitimate).

Whenever Phoebe sees him, her face lights up, the songs are on a maddening loop in our cars, and we have a LOT of photos of her hugging him – one of which she frequently falls asleep holding.

So when The B Word was uttered, I knew where we’d be going for her birthday: Mattel Play Town. It’s a fab place for kids, and we’ve spent many a happy hour there, enjoying the shows, exploring the soft play, dancing with Angelina, stacking bricks with Bob the Builder and watching the Thomas the Tank Engine cinema show, complete with bubbles.

The staff are fab, it’s on The Entertainer, the food is good, and there’s parking right downstairs. And there are family toilets so dads can do their bit when it comes to changing nappies and the false poop alarm for the umpteenth time.

We hadn’t been to a party there before, so I didn’t know what to expect, but it was FANTASTIC – and everything Phoebe had dreamt of for her celebrations. 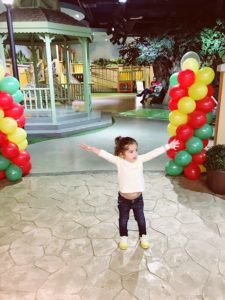 We took over Barney’s playhouse on the second floor from 10.30am, so the kids could run and climb and play for an hour. They especially loved the interactive lights on the floor, the kitchen area and the slide, while there were sofas (and coffee) for the parents, who could join for free.

There was a huge balloon arch at the entrance, a dining area for the children complete with Barney placemats, a table for presents, and special decorated area for the cake.

The staff were brilliant at getting the little ones dancing and playing games (adults were also roped in), then Barney and his friends, BJ and Baby Bop joined. Phoebe’s face was a picture! They joined in the dancing, posed for photos and were next to the family while we cut the cake. 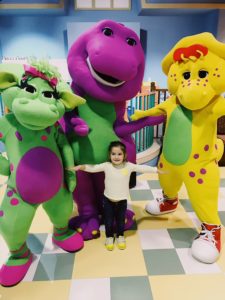 Mattel Play Town prides itself on serving healthy, homemade food, and had sent out a menu ahead of time for us to choose from. Options included pasta with tomato sauce, breaded chicken strips with potato wedges, and sandwiches. Phoebe chose the pizza, and it was a big hit, and we provided a cake and cupcakes (from Spinneys). 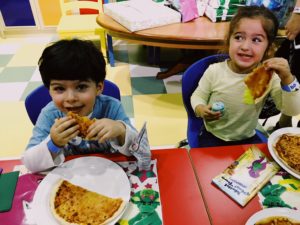 After the party in Barney’s playhouse, everyone was free to stay at Mattel Play Town to have more fun, so we stayed until everyone was well and truly partied out. I think I did 18,000 steps that day….! 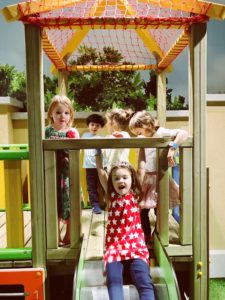 I loved that when we arrived there was a photo of Phoebe on the screens above the desk, and it made her feel really special. Personalised e-vites were also sent to me ahead of time, so I could send them out via email or WhatsApp, which saved a headache. They can also provide party bags, face painting and vouchers for the kids. 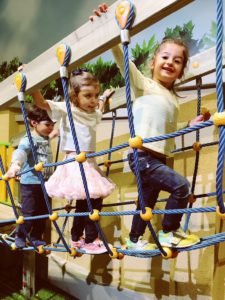 We’re so glad that we had this party for Phoebe. She talks about it ALL THE TIME, and loves looking at the photos. Prices start from AED115 per child, and the birthday boy or girl goes free, plus parents/guardians are included. I just wish I could get the songs out of my head…