The truth about clothes shopping after having a baby 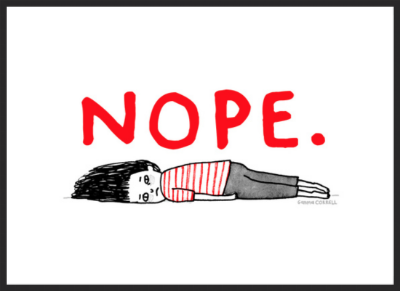 As soon as I had a definite ‘baby bump’ (instead of looking like I’d had a week-long date with a baguette) I embraced cotton jersey and Lycra with glee abandon. Leggings, stretchy maxi dresses and, umm, ‘formal’ leggings were in – structure was out. In short, if it wasn’t the kind of clothing you’d don for a sofa-based nap, it was at the back of the wardrobe.

Our baby is nearly seven months old now and I’ve been back at work for half of her life. My Flopeds and yoga pants (that have never seen a gym) won’t cut it in the office, and 70% of my pre-pregnancy clothes won’t fit. So where does that leave me? At the mall. Devastating.

Here are some facts about buying clothes after having a baby:

I’m 4kg off my pre-pregnancy weight (hey, it took nine months to go on, so I have a couple of months’ grace) and then want to lose another 10kg. Ok, 15kg. But even clothes that I was fitting into in the first few months of pregnancy don’t fit – hips expand, thighs grow, skin sags, muscle tone is lost. All in all, it’s a recipe for appalling body confidence, despite the fact you’ve put yourself through one of the most staggering, dramatic ‘miracles’.

So shopping can be surprising at best, traumatic at worst. You’ll probably take a range of sizes into the changing room, then wish you’d worn Spanx, or a better bra, or heels. Or two pairs of Spanx. Then leave the mall with a pack of three mega adorable sleepsuits from M&S (size 6m-9m).